Throughout the past month, our backend and platform teams were occupied with refactoring relations aka the ‘Relations as an Object’ project. This effort, though not visible in this month’s release, is essential to unblocking long-awaited features such as Relations deletion/modification and in-line Sets (we promise, it’s coming!).

Meanwhile, we're stoked to bring you Sets creation on mobile and dozens of improvements to Editor and Sets in response to your feedback from our previous release.

For the full release notes from each team, be sure to check out the Release Notes category in our Community Forums.

Quick Capture - So fresh & so clean!

So fresh & so clean! We know that a clean interface is essential to productivity for many of you. In this release, we simplified our Type selection interface from the + button Object creation flow so there's less standing in the way between you and your thoughts.

Kanban - For real this time!

Polyglots, rejoice! We're delighted to have such a multinational community and  heard your feedback from our previous release - you can now select multiple spellcheck languages in your Settings.

This month, our teams have focused on delivering improved Sets functionality on mobile to rival the Desktop experience. We’re so excited to bring you a series of upgrades which we hope will bring your Sets game to the next level.

Set creation from + button is now possible on iOS and Android - simply hit that + button and choose Object Type: Set to start compiling Sets of every (any)Type ;)

We’ve introduced a new menu for URLs and Link-to-Object blocks to make it easier to paste from clipboard, and to add/remove links

The iOS app now supports underline markup from editor in addition to Bold and Italic - just select any string of text and use the text editor menu to apply.

A couple of releases back, the iOS team introduced Gallery view for Sets. This month, we’re proud to bring you List view! Perfect as a less formal and more space-efficient way of visualizing your Objects, you’ll find List view option under your Sets view menu.

February town hall, features-in-progress, and noteworthy happenings from the team this month 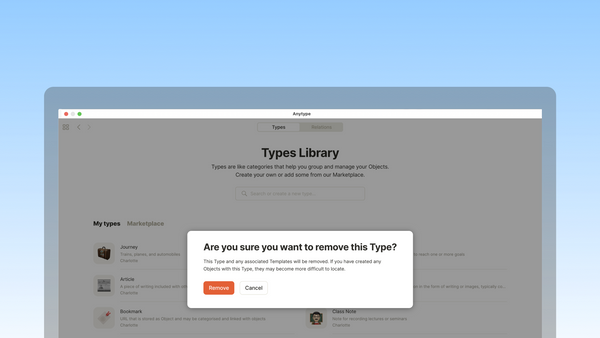 Kicking off 2023 with a clean, productive slate.

Amidst the typical end-of-year hustle and bustle, our team would like to pause and share some reflections on the past 12 months: the highs, the lows, what we learned, and what we hope to bring with us into the next year. What Was Awesome 🎯 Growth in our community and number